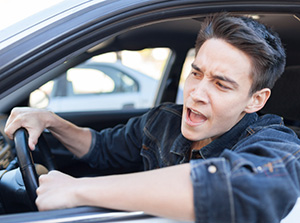 Aggressive driving is becoming a common occurrence on American streets. A recent survey found that 9 out of 10 respondents said that they believed aggressive driving was a threat to safety on the roads.

The AAA Foundation did a study of 10,000 road rage incidents over 7 years and found that 218 murders had resulted in these cases, and 12, 610 personal injury cases had occurred.

Often the reasons behind the aggressive actions are trivial, but they can have serious consequences for drivers on the road.

If you or someone you love has been injured as a result of an aggressive driver, call The Edwards Law Firm for a free consultation at 800-304-9246. Our experienced team of auto accident lawyers(http://www.edwardslawok.com/causes-of-auto-accidents.html) can help get you the justice you deserve.

Aggressive driving is defined as an action that is performed deliberately with ill intention or with disregard for safety. It can include such actions as changing lanes erratically, tailgating, cutting other drivers off during lane changes and other reckless driving(http://www.edwardslawok.com/oklahoma-reckless-driving-accident-lawyer.html) behaviors.

However, some aggression can extend to physical contact or following someone home to continue the conflict. In some cases, the aggressor may be so deeply involved in extracting revenge that he or she causes injury to bystanders, causing many aggressive driving lawsuits each year.

Protect Yourself Against Aggressive Drivers

Your first defense against aggressive drivers is to monitor your own driving carefully to avoid giving offense to other drivers. You can also take measures to protect yourself when you encounter an aggressive driver on the road:

If you have been involved in an aggressive driving accident, get experienced legal help from our auto accident injury lawyers.