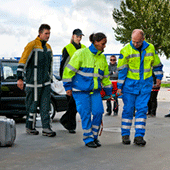 Two Highway Patrol Troopers were struck by a car while investigating an overturned semi-truck on 1-40 westbound late last Saturday night.

The Troopers were hit around 10 p.m. on Jan. 31 near Shawnee. One Trooper was pronounced dead at the scene, and the other was taken to the University of Oklahoma Medical Center in serious condition.

The trooper that passed away was a graduate of Southeastern Oklahoma State University. He graduated from the Oklahoma Highway Patrol in 2013, and left behind a wife and two daughters. He was 30 years old.

Oklahoma Governor has ordered that all American flags be flown at half-staff this weekend in honor of the trooper. The troopers funeral will be held tomorrow at noon in Broken Bow.

The Edwards Law Firm reminds all drivers to give car accident scenes as much space as possible. Slow down when approaching the scene, move over a lane if you can, and leave as much space between yourself and emergency responders as possible.

If you or your loved one has been injured in a collision, you need experienced legal assistance on your side contact one of our Tulsa personal injury lawyers. At The Edwards Law Firm, we pride ourselves on helping the injured get justice after an accident.