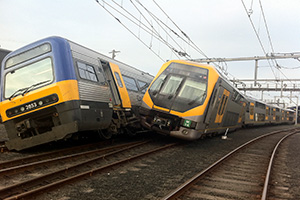 A driver who was arrested for crashing into two cars while trying to beat the crossing arms on a railroad track is sparking controversy about driver behavior around trains.

Police say the incident happened at NW 122nd Street and Santa Fe Avenue in Oklahoma City. The driver told police he saw the truck in front of him try and beat the crossing arms, so he did the same. During this attempt, Butlers car was hit by the oncoming train and sent bouncing into two other vehicles. Fortunately, no one was killed, but two passengers were taken to the hospital for injuries.

According to a police report, the driver was arrested on complaints of driving under the influence of alcohol, failing to stop at a railroad crossing and driving with a suspended license.

Failure to Stop at Railroad Crossings

Over the last year, Oklahoma City has issued 33 citations to drivers who have failed to stop at a railroad crossing. The fine for that citation is $172.

There is an obvious danger in failing to stop at a railroad crossing.

When a driver fails to adhere to the signs and signals(http://www.edwardslawok.com/disobeying-traffic-signals.html) posted up by the state, they are endangering the lives of all those around them.

With more than 50 years of combined personal injury legal experience, the attorneys at the Edwards Law Firm are committed to helping accident injury victims fight for the compensation we deserve. We are well-versed in auto accident claims and can help guide you through the entire litigation process.

If you or a loved one has been hurt in a motor vehicle collision by a negligent driver and the victim is seeking legal counsel, our attorneys can help.