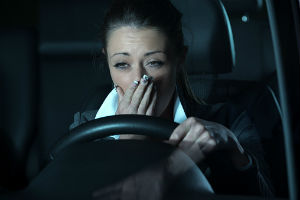 The effects of missing one to two hours of sleep can double the risk of being involved in a car accident.

A study from AAA, titled the Acute Sleep Deprivation and Risk of Motor Vehicle Crash, established a link between drowsy driving and accident rates by examining police reports of car accidents from July 2005 to December 2007.

The study compared the accident risk between drivers who had not received the recommended seven hours of sleep during a 24-hour period and those who had slept at least seven hours. The AAA Foundation’s research findings include:

The National Sleep Foundation found that drivers who slept for two hours or less within a 24-hour period were unfit to operate a vehicle.

Those who slept four to five hours a night displayed the same driving patterns and accident risk as a driver who had consumed more than the legal limit of alcohol.

AAA estimates that 21 percent of all fatal car accidents were caused by drowsy drivers. According to the National Highway Traffic Safety Administration, there were 27,875 traffic-related deaths for the first nine months of 2016.

AAA has urged drivers to follow a sleep schedule that allows at least seven hours a night. If you are attempting to make a long trip that could cause drowsy driving, AAA recommends the following tips:

Symptoms of drowsy driving can include drifting in and out of lanes, finding it difficult to keep your eyes open or not being able to remember the last few miles driven. If you’re in a situation where you’re suffering injuries from a person who fell asleep at the wheel, reach out to our auto accident attorneys in Tulsa today.

AAA found that 97 percent of drivers who were surveyed for the study viewed drowsy driving as an irresponsible driving behavior. However, nearly one-third admitted to having driven while sleep deprived.

Those who have been injured in an accident caused by a drowsy driver may be entitled to compensation for medical bills, lost wages, and pain and suffering. The Tulsa auto accident attorneys at the Edwards Law Firm will review your claim in a free consultation. We also provide our legal services without charging any legal fees unless you receive a fair outcome in your claim.