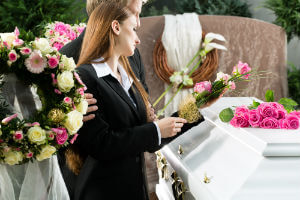 Losing a loved one is devastating, and can be made even more tragic if his or her death was preventable. When this occurs, certain members of the decedent’s surviving family may be able to pursue a wrongful death claim against the liable party.

If you believe another’s negligence resulted in the death of a loved one, the Edwards Law Firm’s wrongful death attorneys are ready to help you file a claim. Below, we discuss who is entitled to file a wrongful death lawsuit in Oklahoma and when this type of legal action can apply. Do you need a personal injury lawyer in Tulsa you can trust? Contact us today.

What is a Wrongful Death?

A wrongful death in Oklahoma is a death that resulted from a wrongful act or omission caused by another’s negligence, recklessness or intentional actions, according to Oklahoma Statutes Title 12, Chapter 17, Section 1053.

Who Can File a Wrongful Death Claim?

Often, the decedent will name a personal representative in an estate plan or will before his or her death. The representative can be a member of the decedent’s family or an outside party and is not entitled to receive a portion of the damages recovered.

However, if the decedent did not choose a personal representative or the person chosen refuses to act as such, a court may appoint one to oversee the claim.

In the event that an unborn child’s death was caused by another’s wrongful actions, a parent of the child can bring a claim against the at-fault party.

How Long Do I Have to File a Wrongful Death Claim in Oklahoma?

In Oklahoma, the personal representative of the decedent’s estate has two-years file a wrongful death claim, according to OKS Stat. Ann tit. 12 § 1053.

If the decedent’s personal representative fails to meet this deadline, the survivors of the decedent lose the right to recover compensation from the at-fault party.

What Damages Can I Pursue in a Wrongful Death Claim?

The damages awarded from an Oklahoma wrongful death lawsuit are generally distributed between the decedent’s surviving spouse, children or next of kin, as such:

The compensation recovered for the mental pain and anguish the decedent suffered prior to his or her death shall be distributed to the surviving spouse or children, or the next of kin, in the same proportion as the decedent’s personal property.

This includes compensation for the financial support the decedent would have provided to his or her dependents had he or she survived the wrongful act.

These damages shall be distributed among the decedent’s children, spouse or next of kin according to their level of dependence upon the decedent.

All damages recovered from a wrongful death lawsuit regarding loss of consortium shall be awarded to the decedent’s surviving spouse. This includes compensation for the loss of an intimate and emotional relationship, and includes damages for losing:

The damages recovered for loss of companionship shall be payable to the decedent’s children and parents and distributed in proportion to the loss each suffered.

In rare instances, punitive damages may be awarded in addition to the above damages in a wrongful death claim. However, these damages can only be awarded depending on certain factors listed in OKS Stat. § 23-9.1, which include the:

If these conditions are met, a jury can award punitive damages to the decedent’s surviving spouse and children in proportion to the same amount as personal property of the decedent’s estate.

At the Edwards Law Firm, we are committed to providing victims of negligence with diligent legal representation to recover the justice and compensation they deserve.

If your loved one’s untimely death was the result of another’s negligent or reckless actions, our wrongful death attorneys will thoroughly investigate the situation to hold the at-fault party accountable for your suffering.

We will provide you with a free legal evaluation of your claim to determine if you have a valid case that entitles you to compensation. We work only on a contingency fee basis, which means we only get paid if you receive compensation for your loss. Schedule a consultation today.