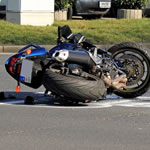 On Jan. 26, a 40-year-old was riding eastbound on 2nd Street near Vista Lane in Edmond when a black BMW driven by a 64-year-old made an illegal U-turn in front of the motorcycle.

A passenger on the back of the motorcycle, was thrown off the bike into the street, where she was run over by another vehicle. She was not wearing a helmet, and died at the scene.

The vehicle which ran over her was driven by a young girl with only a learners permit. While she was not driving with a licensed adult in the vehicle, the police report confirms that she could not have avoided the accident.

The driver of the motorcycle was taken to OU Presbyterian Hospital to be treated for various injuries. He was in fair condition after the accident.

The 64 year old driver told officers that he was attempting to turn into a private driveway in order to turn around. He did not see or hear the motorcycle coming up behind him.

Yesterday, the Edmond Police Department stated that it had submitted a charge of misdemeanor negligent homicide to the District Attorneys Office in connection with the accident. The district attorney is reviewing the case, but has not yet decided to bring formal charges against the 64 year old driver.

Riding on a motorcycle often involves an element of danger. Since bikes are smaller, more unprotected vehicles, larger cars may not always see them or look for motorcycles before making turns or other maneuvers. When motorcycle accidents occur, the results are often fatal.

If you or your loved one has been injured while riding a motorcycle, you need experienced help on your side. The Tulsa injury attorneys at The Edwards Law Firm have been fighting for the rights of injury victims for years, and have the expertise you need on your side after an accident.