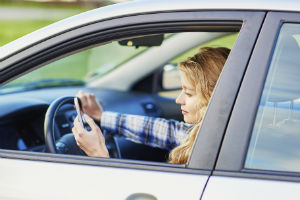 Oklahoma has experienced a dramatic decrease in injuries related to auto accidents caused by distracted driving involving electronic devices, according to new data from the Oklahoma Highway Safety Office (OHSA).

The OHSA has attributed the reduction to a state law enacted in 2015 that made it illegal for motorists in Oklahoma to text while driving. Oklahoma was the 46th state to enforce a law of this kind, as drivers are more prone to crashing their vehicles when texting and driving. If you are the victim of a car crash where the driver was texting while driving, reach out to auto accident attorneys in Tulsa today.

In 2015, the number of car accident injuries caused by drivers who were distracted by an electronic device dropped from 538 to 422 during the first nine months after the law took effect, compared to the same period in 2014.

In addition to these results, the crash total from the nine-month time frame dropped from 1,291 to 1,129, while fatal crashes fell from 10 to seven within the total number of crashes.

While the new law may have reduced distracted driving accidents, law enforcement officers are still finding it difficult to enforce, as drivers must admit to texting while driving in order to be issued a citation.

Despite the loophole, AAA Oklahoma spokesmen Chuck Mai believes that the figures reveal the law to be effective, and Oklahoma drivers have responded to the new, life-saving legislation.

At The Edwards Law Firm, we understand that recovering from an accident caused by a negligent driver is difficult. Our auto accident attorneys in Tulsa are committed to helping you maximize the compensation you are entitled. Our initial consultation is always free and we provide our services on a contingency fee basis, so we do not charge any legal fees unless you are awarded fair compensation. Contact us today for more information.